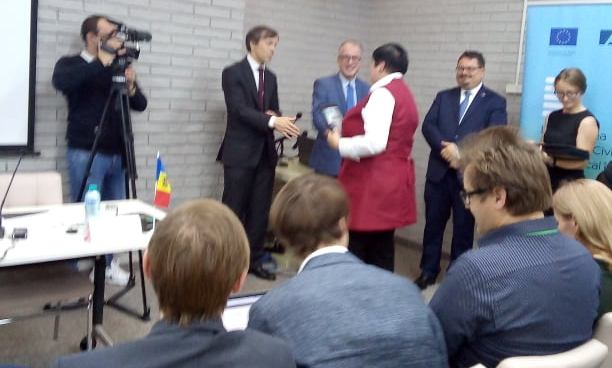 On 22.10.2019, the president of the “Parteneriat Social” Association, Mrs. Raisa Balan, has attended the official awarding event of first grant beneficiaries within the project: “Developing the civil society at the local level in the Republic of Moldova”.

The event was opened by Mrs. Ana Severin – local Project Coordinator for Moldova.

Some of the opening speeches were held by the present officials. In light of this, the Chief of the EU Delegation in Moldova, Mr. Peter Mihalco respectfully passed his greetings of success to all awarded beneficiaries and wished successful implementation for all projects. Other speeches were held by the representative of the Department for European and International Cooperation, Mr. Stepan Malerius and the representative of the Konrad Adenauer Foundation (Berlin). The grant certificates were awarded to all present beneficiaries by Mr. Peter Mihalco.

„Parteneriat Social” Association benefited from financial support from the European Union, as well. It is directed to support the implementation of the project “With the seniors’ experience, Your voice gets at a higher level”, aiming at encouraging active participation of seniors in community daily life, as well as in proposing some community initiative and addressing local problems. Another objective is to encourage the participation of seniors in decision-making process led by Leova rayon council and local councils from Leova town, Filipeni, Hanasenii Noi, Sirma and Sarata Noua villages.

We are, also, interested in working with young generation, better say involving volunteers in our project, as well as encouraging them to attend LPAs meetings.

As an instrument that will be created within our project and will advocate for seniors, will be the Council of seniors, which will comprise 7 seniors and 10 volunteers from the selected localities. This council will pay a role of monitoring, consultation and transparency assurance of the decision making processes.